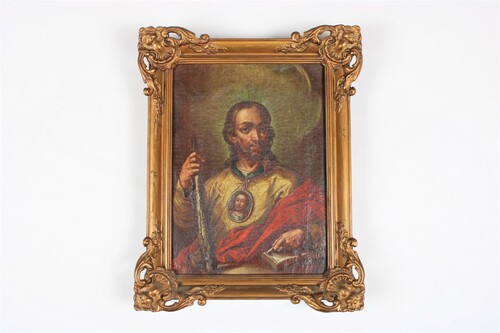 Add to shoppingcart
Product added
Any question? Don't hesitate to contact us.

A painting of Judas Taddeüs/Lebbaeus with a medaillon of Jesus Christ on his chest (known as “The Image of Edessa”). Oil painting on canvas in a gilded wooden frame. On the back of the frame some written explanations about the painter Mathieu Elias. Hand written certificate from 1972. This piece of art is attributed to Ma(t)thieu Elias, a flemisch master, born in 1658 in Peene, near to Cassel (France). He died on 22nd of april 1741 in Dunkerque (Dunkirk). Mathhieu Elias/Elyas/Elie was a pupil of Philippe de Corbehem. He went to Paris in 1684 and became head of the Académie de Saint-Luc. Some of his paintings and drawings are exposed in churches and musea worldwide: Dunkerque, Ieper, Louvre Parijs, Vienna, New York.
Dim: 20*27 cm, frame 27*34 cm

Shipping Costs
Shipment possible or pick-up at the store